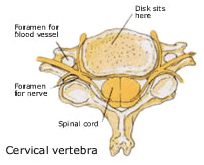 Neck and arm pain, among other symptoms, may occur when an intervertebral disc herniates. This happens, either suddenly with injury or slowly over time, when some of the disc's jelly-like centre (the nucleus pulposus) bulges or ruptures through its tough, fibrous outer ring (the annulus fibrosus) and presses on a nerve.

A common cause of cervical pain is a rupture or herniation of one or more of the cervical discs. This happens when the annulus of the disc tears and the soft nucleus squeezes out. As a result, pressure is placed on the nerve root and causes pain in the neck, shoulders, arms and sometimes the hands. Cervical disc herniations usually occur as a result of aging or wear and tear.

Most cases of cervical pain do not require surgery and are treated using non-surgical methods such as medications, physical therapy and/or bracing. However, if patients experience significant arm pain and weakness that does not improve, surgery may be necessary.

An anterior cervical discectomy is the most common surgical procedure to treat damaged cervical discs. Its goal is to relieve pressure on the nerve roots or on the spinal cord by removing the ruptured disc. It is called anterior because the cervical spine is reached through a small incision in the front of the neck (anterior means front). During the surgery, the soft tissues of the neck are separated and the disc is removed. Sometimes the spaces between the vertebrae are left open. However, in order to maintain the normal height of the disc space, the surgeon may choose to fill the space with a bone graft or small "cage" made of carbon fibre.

A bone graft is a small piece of bone taken from the patient's body (usually from the pelvic area). These days a very small core of bone is taken with special instruments lessening the discomfort in the region after surgery. This piece of bone fills the disc space and ideally will join or fuse the vertebrae together. This is called fusion. It usually takes a few months for the vertebrae to completely fuse. In some cases some instrumentation (such as plates or screws) may also be used to add stability to the spine.