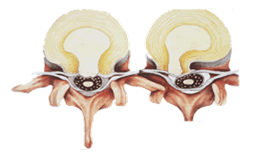 A condition in which part or all of the soft, gelatinous central portion of an intervertebral disc (the nucleus pulposus) is forced through a weakened part of its retaining ring, resulting in back pain and possible nerve root irritation.

Usually herniation takes place in the lumbar area of the spine.  Lumbar disc herniation occurs 15 times more often than cervical (neck) disc herniation, and it is one of the most common causes of lower back and leg pain.  The cervical discs are affected 8% of the time and upper to mid back (thoracic) discs only 1-2% of the time.

Nerve roots (large nerves that branch out from the spinal cord) may become compressed resulting in symptoms such as pain or changes to muscle power or skin sensation.  Abnormal function of a nerve from the neck or back is known as “radiculopathy”.

Disc herniation occurs more frequently in middle aged and older men, especially those involved in strenuous physical activity.  Other risk factors include any congenital conditions that affect the size of the lumbar spinal canal.  Pain or loss of sensation or weakness in the leg which results from a herniation of disc material may give rise to different findings depending on a number of factors including the size of the disc prolapse and the degree to which the spinal nerve is compressed by it.

A disc protrusion occurs when the material of the nucleus pulposus extends into the retaining ring of the disc without actually rupturing through it.  A lump of this material is still able to compress the nerve however and symptoms in the back or leg may result.

A disc extrusion occurs when the material of the nucleus pulposus ruptures through the retaining ring entirely so that this material is situated in the spinal canal adjacent to a nerve root.

A disc prolapse is often larger than the previous varieties and may cause a greater degree of nerve compression.

An extravasation of this material occurs when the gel of the nucleus pulposus has extruded into the spinal canal and formed a free structure which no longer has contact with the retaining ring of the disc.  On occasions the extent of nerve compression is not only limited to the single nerve passing to the leg.

When there is a very large amount of nucleus pulposus within the spinal canal all of the spinal nerves may be compressed, particularly those involved in bowel or bladder function, and this is known as Cauda Equina Syndrome.  This is usually associated with numbness around the region of the genitals and anus as well as difficulty in passing urine or in bowel movement.  This is a serious condition requiring urgent management and any symptoms such as these should be urgently reported to your doctor.

The most common symptom of a herniated disc is sciatica, a sharp, “shooting” pain that extends from the buttocks down the back of one leg.  This is caused by pressure on a spinal nerve often due to a herniated disc.  Other symptoms which may be related to sciatica include:

Other symptoms of a herniated lumbar disc include:

Herniated discs occur most frequently in the lumbar spine – between the bottom of the ribs and your hips – and are most common in people in their 30s and 40s.

Symptoms of a herniated cervical disc include:

A physical examination and history of pain may be sufficient to diagnose the disorder.  A neurological examination will be performed to evaluate tendon reflexes, sensation and muscle strength.  Often examination of the spine will reveal a decrease in the spinal curvature in the affected area.

Your medical history is key to a proper diagnosis.  You may have a history of back pain with gradually increasing leg pain.  Often a specific injury causes a disc to herniate.  A physical examination can usually determine which nerve roots are affected (and how seriously).  A simple x-ray may show evidence of disc degenerative spine changes.

Conservative treatment usually works.  Most back pain will resolve gradually with simple measures.  Bed rest and over the counter pain relievers may be all that is needed.  Muscle relaxers, analgesics and anti-inflammatory medications are also helpful.  You can also apply cold compresses or ice for no more than 20 minutes at a time, several times a day.  After any spasms settle, you can switch to gentle heat applications.

Learning safe work and play practices, proper lifting techniques and weight control may help to prevent back injury in some people.

Most people with leg pain from a pinched nerve due to disc prolapse recover without further intervention within six weeks (about 80%).  When pain persists beyond this period, or no improvement is occurring, future treatment may be discussed.