SCOLIOSIS – A condition of curvature of the spine.

A normal spine should be straight when viewed from the back.  In scoliosis there is an abnormal side to side curve.  This may result in deformity of the back and may lead to an uneven waist, uneven shoulders, prominent shoulder blades or elevated hips.  The patient may even lean to one side.  In most individuals scoliosis does not cause pain.

A lateral (away from the middle) or sideways curvature of the spine (scoliosis) generally begins just at the onset of puberty and progresses during the adolescent growth spurt.  If caught early, progressive spine curvature can be prevented.  Scoliosis affects girls much more frequently than boys.

There are three general causes of scoliosis:

The idiopathic form in adolescents is the most common and may have a genetic predisposition.  Most cases occur in girls and curves generally worsen during growth spurts.  There are also infantile and juvenile forms that are less common and affect a similar number of boys and girls.

The greater the initial curve of the spine, and the younger the patient at diagnosis, the greater the chance of progression of the curve.  Severe scoliosis (curves in the spine greater than 100°) may cause breathing (respiratory) problems. 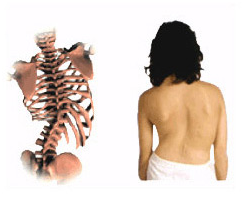 The physical examination will include a forward bending test that will help the practitioner define the curve.  There will also be a thorough neurologic exam to look for any changes in strength, sensation or reflexes.