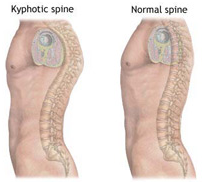 CURVATURE OF THE SPINE (KYPHOSIS) - A curving of the spine that causes a bowing of the back, such that the apex of the angle points backwards leading to a slouching posture or round shoulders.

Kyphosis may develop for several reasons.  Slouching and poor posture can stretch spinal ligaments, thus increasing the natural curve of the spine.  This postural kyphosis usually begins to develop during adolescence.  It is more common among girls than boys and rarely causes pain.  Exercises to strengthen the abdomen and stretch the hamstrings may help correct postural kyphosis.  As posture improves, the kyphosis naturally diminishes.  This spinal disorder is more commonly known as “round back” deformity of the spine.

Kyphosis can result from trauma, developmental problems or degenerative disease.  Kyphosis can occur at any age, although it is rare at birth.  Adolescent kyphosis, also known as Scheuermann’s disease, results from the wedging of several consecutive vertebrae.  The cause of Scheuermann’s disease is unknown.  In adults kyphosis can be seen as a result of osteoporotic compression fractures, degenerative disease (like arthritis), or spondylolisthesis (slipping of one vertebra forward on another).

Other causes of kyphosis include infection (such as tuberculosis), spina bifida (congenital deformity with incomplete formation of part of the spine), disc degeneration, endocrine diseases, Paget’s disease, polio and tumours.

Kyphosis can also be seen in association with scoliosis (an abnormal sideways curvature of the spine seen in children and adolescents).  Risk factors are related to the causes.

Treating and preventing osteoporosis can prevent many cases of kyphosis in the elderly.  Early diagnosis and bracing of Scheuermann’s disease can reduce the need for surgery, but there is no way to prevent the disease.

Symptoms of kyphosis can include:

Physical examination confirms the abnormal curvature of the spine.  The exam should also look for any neurologic changes (weakness or changes in sensation) below the level of the curve.

A spinal x-ray will be done to document the severity of the curve and allow serial measurements to be performed.  If there is any question of a tumour, infection or neuralgic symptoms than an MRI may be ordered.

Treatment depends of the cause of the disorder:

Adolescents with Scheuermann’s disease do well.  The deformity stabilises once they stop growing.  Any discomfort associated with growth tends to subside when growth ends.